In yesterday’s video, Sean Womack touched on the commonly used phrase, “Life is not a sprint, it’s a marathon.” He goes on to explain that life’s not a marathon, “nobody can run for fifty years,” Sean says. Instead, he invites us to think of life as “a long slow walk.” And honestly, I would add that some stretches can stall to a lengthy, grueling trudge. All the while culture around us spins at a breakneck speed, sweeping us into comparisons that are a version of reality that is far from realistic or healthy.

The patience and deceleration that Sean invites us to is not just solid conventional wisdom. He calls us back to something that has been true about God’s people throughout history, long before we started naming generations and painting them with broad brushstrokes of presumption. Whether they were awaiting deliverance in Egypt, longing to return home from exile, or hoping for the Messiah who was promised, the people of God had a long view of life and salvation.

It was Moses who affirmed God’s might and demanded the Israelites be patient. When Pharaoh and his army were pursuing the Israelites after they fled Egypt, Pharaoh trapped them against the Red Sea. Their cornered situation created despair and they completely doubted God. But Moses offered them encouragement

In this moment, the Israelites’ hope was anchored in God’s faithfulness. They held onto the goodness of His character and their identity as His children. They trusted Him even if what their hearts ached for, didn’t happen right away. They had an experiential knowledge that God was at work even when He seemed quiet. Now that is a counter-cultural idea that will ground us as believers and impact the world around us. Eugene Peterson called it, “a long obedience in the same direction.”

So, what do we do? How do we tap into this rich heritage that we have as Christians rather than sprinting and running and hustling and comparison? Begin each morning with contemplation – quieting our mind, opening our heart, and sitting in the presence of God.

If that’s not enough take a moment to reflect on Sean’s suggestions of what else to do in the meantime: 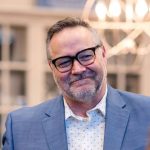