Facing Your Giants in Life

Stop. Force yourself to think about this question. It could change your life.

Who or what is a Giant in your life?

We all have them. But we try not to look at them. We try to ignore them. We try to work around them. Why? Because of one word…FEAR. We’re afraid of what might happen if we face them, if we pursue them.

I have recently been facing some major Giants in my life. I needed some support to do it. I found that support in this powerful story that has inspired and encouraged me to face my Giants.

Years ago, God (Moses’ boss) instructed him to send some of the key leaders from his team to research a new market. It was actually the land that He wanted to give Moses’ people. It was a rich market, full of opportunity. It was described as a land “flowing with milk and honey.” Moses picked his team of 12 leaders and gave them very specific instructions on what to research on their 40-day business trip.

When they returned, they did indeed report the “new market opportunity” flowed with milk and honey! (They even brought some samples back to show the rest of the team.) But then the inevitable happened…10 of the 12 leaders began to report all of the “Giants” that inhabited that new market. They reported all of the reasons why it wouldn’t work. The cities were large and heavily protected, and yes, there were actually real Giants there! They reported…fear. That fear spread throughout the team, convincing the rest that new opportunity would fail (sound familiar?).

But thank God, there were two leaders on that team of 12 that didn’t let fear drive them. Joshua and Caleb challenged the entire team that they could do it! They added a powerful caveat to their inspiring challenge. They said if the Lord was pleased with them, He would lead them into that land. They warned not to rebel against God, and not to be afraid, because they were walking with the Lord.

Unfortunately, the rest of the team remained in their comfort zone (fear) and because of that, only Joshua and Caleb entered the new land.

I want to be a Joshua and Caleb kind of leader. How about you?

Who or what is a Giant in your life that may be keeping you from leading at home and at work in the way that God has called you?

Let’s go for it! Let’s find and face the Giants in our lives that are keeping us from living the life we are called to live! 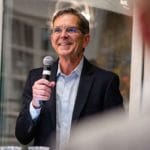 David Roth has been the president and CEO of Workmatters since October, 2003. Workmatters is a 501(c)3 nonprofit organization founded in Northwest Arkansas in 2003 with a mission is to help people pursue God’s purpose for their work. Since then, Workmatters has been used to impact thousands of leaders in Northwest Arkansas and across the U.S. Prior to leading Workmatters, Mr. Roth was vice president, sales and marketing for J.B. Hunt Transport, Inc. Before joining J.B. Hunt in 1999, David was the senior vice president of marketing for Manugistics, a supply chain management software provider in Maryland and vice president of marketing for American Software in Atlanta, Ga. He also has nine years of supply chain management experience with McKesson Corporation in San Francisco, Calif. and Harrison, Ark. David has a bachelor’s degree in marketing from the University of Arkansas. He resides in Fayetteville, Ark. with his wife, Theresa and has two sons, Dylan and Tyler.