Coworkers and Neighbors with a Prickly Past

I remember when I mentioned to my neighbor Jenny that I attended church. Immediately her body stiffened as she said, “I don’t think Christians should impose what they believe on others. In fact, I think we should have In God We Trust removed from our money.”

Where did that come from?  Though I hadn’t asked Jenny to come to church with me, offered to pray for her, or any other overtly Christian thing, the mere mention of attending church brought up negative feelings for her. Since I was new in the neighborhood, I realized the next few conversations with Jenny would set the tone of the kind of relationship I would have with her.  I faced a few choices. I could:

Though each of these options crossed my mind I felt like the Holy Spirit reminded me that when people have had negative experiences with Christians in the past, it’s difficult for them to trust Christians in the future. It was clear from Jenny’s response that she didn’t trust Christians, so I began to pray and ask God to show me how to best build trust with her.  It was difficult not to try and prove to her that I wasn’t “that kind of Christian,” or whatever stereotype she believed all Christians were. So rather than trying to prove to her that I wasn’t going to be like people in her past, I just tried to get to know her.

Grow in the Soft Skills

Over the years I’ve learned that listening and empathy are greatly underestimated skills that most of us can grow into.  Some people are naturally empathetic but like many skills it is something we can learn more about and put into practice.  In their book, The Athena Doctrine: How Women (and The Men Who Think Like Them) will Rule the Future, authors John Gerzema, Michael D’Antonio write “Empathy is the starting point for exploring social needs and building a closer connection with your customer,” In a later chapter they write, “Vulnerability is today the most important agent of change management.”  Whether at work, in our neighborhoods, or places we volunteer, empathy and vulnerability are two of the greatest tools God has given us to build trust with people far from God.  To be clear, “people far from God” is anyone who might be struggling to see that they are loved by Jesus and accepted for who they are. This can also mean Christians who have been hurt or disenfranchised from having a relationship with God.

The pain people carry from past experiences with Christians can be tremendous. God may have placed you in a person’s life simply to help them see that they are loved and that you aren’t trying to push any agenda or belief onto them.

God may have placed you in a person’s life simply to help them see that they are loved and that you aren’t trying to push any agenda or belief onto them. Click To Tweet

A key way to build trust with others is to listen to them.  Most of us think we are good listeners, but it is actually hard work to listen to someone in a way that shows you care for them! Jumping in with a story about a similar experience, offering advice, or arguing about why their experience isn’t valid are quick ways to end a conversation and confirm to people that you aren’t actually interested in hearing what they have to say.  It was difficult when Jenny responded in such a negative way to something I had shared about my life.  I felt defensive, judged and angry. It wasn’t fair that she automatically assumed I was going to impose my beliefs on her just because I mentioned I was going to church!

Jumping in with a story about a similar experience, offering advice, or arguing about why their experience isn’t valid are quick ways to end a conversation and confirm to people that you aren’t actually interested. Click To Tweet

I haven’t always responded in gracious ways, but over the next few months of talking with her I was able to listen and extend empathy to Jenny simply by commenting on what she shared.  I recalled a phrase I had once heard about difficult conversations: “Do you want to be right or do you want a relationship?”  Jenny was in my life whether I wanted her or not—we lived on the same street, our kids were in school together, and we often saw each other at a nearby playground.  I wanted a relationship and more importantly, I knew that Jesus wanted a relationship with her.  Over many months, a few phrases that continued to open up conversations when she shared about work stress, challenging family dynamics, or past hurts from Christians were, “Tell me more about that experience,” “That sounds painful,” and “I’m so sorry you were treated that way.”

Building trust with people takes time, especially when Christians have hurt them in the past.  It feels uncomfortable, complex, and risky. We don’t know if others will reciprocate the empathy or vulnerability we are demonstrating.  But we are responsible to demonstrate love to others whether it is returned or not.  Sometimes the smallest actions can show the love of Jesus to others in ways that can grow unexpectedly and exponentially in someone’s life.  A meal delivered when someone is sick, offering to take on a portion of a teammates workload when they are stressed, taking time to ask how an acquaintance is doing and actually listening to them are simple ways that the kernel of the kingdom of God is scattered.

Building trust with people takes time, especially when Christians have hurt them in the past. Click To Tweet

Your Part in the Story

In Mark 4:30-32 Jesus is teaching parables to his disciples.  He tells them, “What shall we say the kingdom of God is like, or what parable shall we use to describe it? It is like a mustard seed, which is the smallest of all seeds on earth. Yet when planted, it grows and becomes the largest of all garden plants, with such big branches that the birds can perch in its shade.”

We don’t know what is happening in people’s hearts when we interact with them. But we do know that the Holy Spirit is active and that he wants to grow his love and compassion to people who are hurting and far from him.  What are the small actions and interactions that God is prompting you to take this week with people in your life who are far from God?  It doesn’t need to be a big gesture, or take a lot of time.  Are there people you’ve been afraid to connect with for fear of being judged, misunderstood or rejected because you know they don’t like Christians?  Ask God what he needs to do in your own heart so that he can extend his love to others through you. 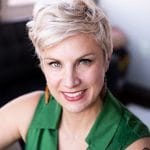 Jessica Leep Fick is the Director of Engagement at Hillcrest Covenant Church in Prairie Village, KS. She is also training to be a real estate appraiser while parenting two boys with her husband Dave. She is the author of Beautiful Feet: Unleashing Women to Everyday Witness, and can be found kayaking in her free time.